SZTAKI and the Fraunhofer Society exhibited together at Hannover Messe

The joint project of SZTAKI and the Fraunhofer Society, the EPIC Center of Excellence, was also featured in the prestigious exhibition held from 12 to 16 April 2021.

Due to the pandemic, the Hannover Messe industrial fair was held online this year. The exhibition, which has existed since 1947, also featured a joint project of SZTAKI, the Budapest University of Technology and Economics and the German Fraunhofer Society, the EPIC Center of Excellence in Production Informatics and Management.

The event featured a three-minute image film about the robots and technical demonstrations of the project's laboratory in Győr. The short film features robotic arms capable of packing and assembling, as well as AGVs transporting workpieces back and forth between workstations.

Not only was the film available for viewing at the online event, but a virtual map provided information on other stations in the EPIC project. The development of local cyber-physical manufacturing system demos is based on the possibilities of solving manufacturing problems and the future-oriented aspirations of the Industry 4.0 process.

One of the outstanding results of the project is the joint project company of EPIC InnoLabs Kft., SZTAKI and the Fraunhofer Research Network in Germany. 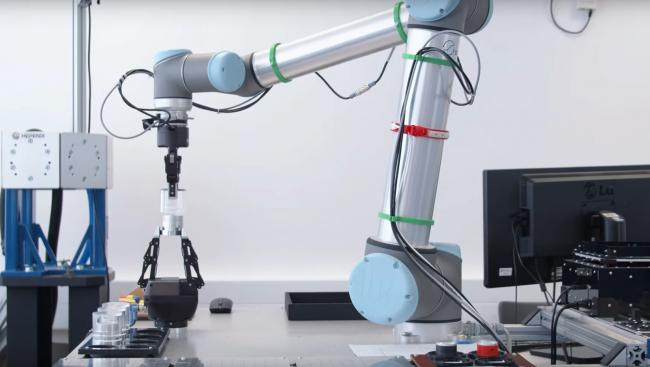 In the Innovation and Demo Space (IDS), some of SZTAKI’s most recent research and development results were presented and demonstrated. SZTAKI is part of the Eötvös Loránd Research Network (ELKH).
2022.06.09.
Researcher of SZTAKI and EPIC Center of Excellence spoke on the Netzwerk Digital Artificial Intelligence Conference

The institute was represented at the event held at the University of Győr on 13 April 2022 with a drawing robot presented by the Research Laboratory on Engineering & Management Intelligence.
2022.04.13.